Additionally, the Ach-mutant transgenic mice line is being established. We have a few different transgenic lines in our facility that are in the process of being genotyped to confirm their genetic make-up. Once confirmed, we will start using them initially to perform certain immunohistochemistry and protein studies.
Posted by Jyoti Narayana, PhD at 9:58 AM 1 comment:

On the other hand, we are also making progress in developing transgenic mice that will be used to  discover effects of FGFR3 mutations on bone growth.
Posted by Jyoti Narayana, PhD at 9:45 PM No comments: 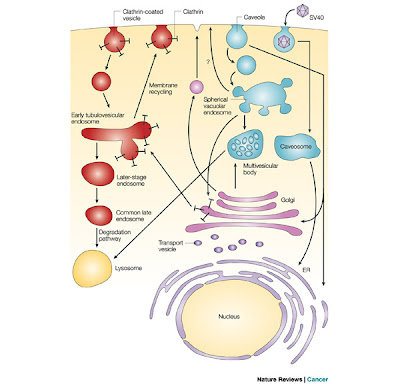 We have previously shown that FGFR3 can be internalized in a clathrin/dynamin-dependent manner and this is required for receptor cleavage to occur that generates the soluble intracellular piece (sICD) (Degnin et al, 2011). Others have reported that FGFR3 may be internalized by both clathrin-dependent and clathrin-independent mechanisms. The mechanism of FGFR3 degradation has not been clearly delineated. We have evidence that FGFR3 forms a complex with proteins, called chaperones that help keep FGFR3 stable. Upon dissociation from the chaperone complex, FGFR3 gets processed and is degraded. The chaperone complexes seem to be important in maintaining stable FGFR3 and therefore also become important targets that affect FGFR3 degradation.
Posted by Jyoti Narayana, PhD at 3:36 PM No comments:


Our current working hypothesis is that sICD, the intracellular cleaved fraction of FGFR3 is involved in regulating at least some of the FGFR3 functions in bone growth and development. We believe it is doing so in part through interactions within the nucleus and possibly through interactions with DNA.  But there are other aspects involved in FGFR3 regulation of bone growth that are essential and will also need to be focused. Let us take a look at two such ideas -

2.      That brings us to our next question. Does sICD interact with other proteins? Protein-protein interactions are known to be important for cellular regulation. Proteins interact with other proteins to form a complex cellular network, and these networks are responsible to carry out cellular functions. Within these networks, protein interactions relay signals that lead to changes in gene expression. Identifying interacting partners can therefor be very useful and can give us some hint about possible  protein functions. Identifying sICD interacting proteins will therefore be important in identifying  possible genes that may be regulated by sICD. Some of the cellular pathways that involve FGFR3 have been characterized by others and will be useful as a starting point.

We are in the process of addressing some of these ideas. We will take a look at the techniques and experiments used to answer these questions.
Posted by Jyoti Narayana, PhD at 7:45 PM No comments:

We have been looking at ways to identify genes that are regulated by FGFR3, specifically in the growth plate. To do so, we are working on a modified version of a technique called as SELEX (Systematic Evolution of Ligands by Exponential Enrichment). This method is typically used to screen for DNA aptamers/sequences that are preferentially bound by a protein/ligand of interest. Briefly, a library of DNA sequences is generated which contains at least some DNA sequences that will potentially bind the protein of interest.  The DNA sequences and the protein of interest are incubated together to let the protein bind to those DNA that present a preferred sequence for the protein to bind. The protein bound to the DNA is then isolated through several wash steps, and finally the specific DNA that was bound to the protein is identified by regular sequencing. 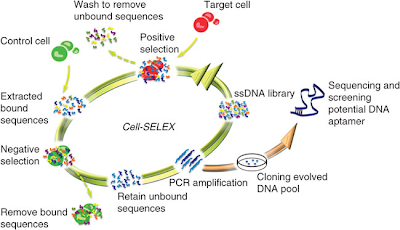 Use of micromass cultures to study how sICD effects cell fate.

Bone, cartilage, and fat muscles are all formed from a common pool of embryonic mesoderm cells. The type of tissue (bone, fat or cartilage) that develops depends on specific stimulation that is produced through cellular signals. Signals involved in bone formation (osteogenesis), cartilage (chondrogenesis) and fat muscle (adipogenesis) are not well known.  Shown in the diagram below, we plan to use murine C3H10T1/2 cells to analyze the effect of sICD on osteogenesis, chondrogenesis, and adipogenesis. We will further look at the genes that are affected by these assays to identify potential regulators of these cellular differentiation processes.

Research Update:
As mentioned in the previous blog, we are in the process of generating different transgenic mice that will be used to better define the functional role of cleaved soluble intracellular fragment (sICD) of FGFR3. Specifically, we are generating three types of transgenic mice: the wild-type FGFR3, the cleavage resistant FGFR3, and the achondroplasia-FGFR3. The wild type FGFR3 is the normal FGFR3 capable of performing all the normal functions. The cleavage-resistant FGFR3 has a mutation in its molecular structure that disables cleavage, and therefore will not be able to generate the sICD fragment unlike the wild-type FGFR3. The achondroplasia-FGFR3 mice contain the FGFR3 with the same mutation found in Achondroplasia condition. Additionally, we will also have mice that express only the sICD fragment, and will be used for future experiments. The process of generating and establishing these transgenic mice involves several steps as discussed in the previous blog. We are currently validating and preparing assays to genotype (the process of determining/identifying the specific genetic type of transgenic mice) mice that will be generated. Once established, these transgenic mice will be used in different experiments that will reveal functional roles for sICD in growth plate development.
Posted by Jyoti Narayana, PhD at 11:40 AM No comments: